With Tax Day (April 17) tomorrow, the National Network of Abortion Funds renews our call to repeal the Hyde Amendment, ending the ban on using federal funds to cover abortions, and to restore abortion access to all. Taxes are the way our nation pays for social goods to ensure everyone living within its borders, and abroad, has access to basic services and fundamental functions. Everyone living in this country pays taxes, and we are seeing a majority of the country voicing their outrage as taxation isn’t translating into taking care of our collective well-being, which includes health insurance, family support, and environmental protections. Our nation’s budget, funded by our taxes, is an indicator of where our nation’s priorities lie — and it’s very clear that wars and artificial border walls are taking precedence over schools and libraries, food and housing, and healthcare, including abortion.

Currently, the Hyde Amendment, and over 32 state equivalents, exclude abortion from the comprehensive health care services that the federal government provides through Medicaid insurance, with exceptions for cases of rape, incest, or the endangerment of the pregnant person’s life. The Hyde Amendment is a broad policy, denying abortion access to federally detained and incarcerated people, disabled individuals on Medicare, low-income residents of Washington, D.C., Peace Corps volunteers, federal employees and their dependents, and military personnel and their dependents. This policy disproportionately impacts low-income people and people of color, and, as research has shown, forces one in four women to carry a pregnancy to term that they otherwise wouldn’t have.

“Everyone deserves access to abortion when they need or want it, and it should not be contingent on where they get their health insurance, their citizenship status, or where they live. The fact that our nation taxes us and in the same breath refuses to ensure everyone living within its borders has access to the constitutionally protected healthcare they’re entitled to is shameful. Taxes should be a source of pride, where we as a nation redistribute wealth to make sure everyone has access to basic services. We should not be burdened by taxation without representation or rights. The majority of people living in the United States believe that everyone should have access to abortions, no matter how much they earn or where they get their insurance. It’s a travesty that Congress refuses to hear the will of the people and ensure everyone is able to obtain the full spectrum of reproductive healthcare they seek.”

At the National Network of Abortion Funds, we know from experience that abortion access is essential to the financial and personal well-being of people enrolled in Medicaid insurance, because people call abortion funds every day and tell us about the challenges they experience in their lives and when trying to afford an abortion. That’s why we are inviting supporters to redistribute part or all of their tax refund to their local abortion fund or to the National Network of Abortion Funds, particularly as part of the National Abortion Access Bowl-a-Thon. Last year, supporters posted on social media their support for their tax dollars funding reproductive healthcare, including abortion. Currently, abortion funds have raised over $770,000 towards their $2,000,000 goal for abortion funds. Committing tax refunds to help pay for abortions is one way to redistribute wealth and fill the gaps in the health system that our government created and refuses to address. 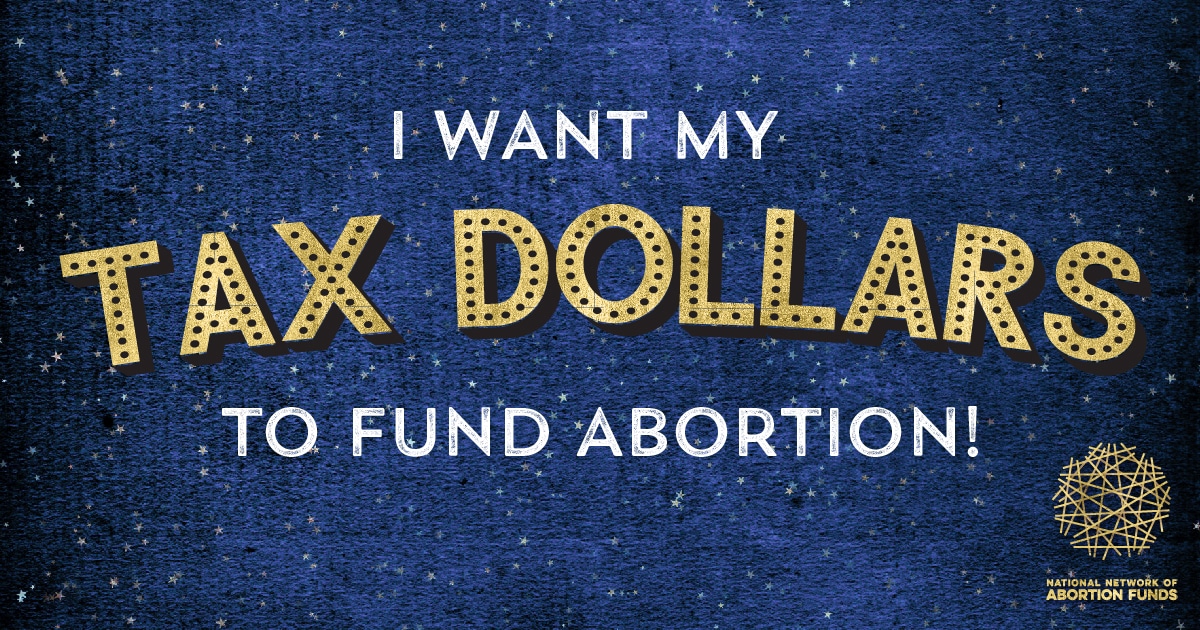 Supporters of abortion access are becoming increasingly vocal about how their tax dollars are spent, particularly as it relates to abortion, and as they see the 2017 Republican tax plan raise their taxes. Several states — including Ohio, Texas, Indiana, and Arizona — have wastefully spent tens of millions of taxpayer dollars defending unconstitutional anti-abortion laws in court. Additionally, a dozen states have been skimming millions from essential programs, like Temporary Assistance for Needy Families, and funneling the money to the over 4,000 anti-abortion crisis pregnancy centers across the United States. Texas has offered up $20 million(originally designated for the Texas Commission on Environmental Quality) to anti-abortion crisis pregnancy centers, as has Indiana with $3.5 million and Georgia to the tune of $2 million. As seen on a recent episode of HBO’s Last Week Tonight with John Oliver, not only do these organizations deliberately mislead and lie to people seeking abortions to keep them from accessing care, in the case of Pennsylvania, they’re being investigated for abuse of state tax dollars. This is a gross misuse of taxpayer dollars to create more financial, logistical, and emotional barriers to abortion access, a constitutionally protected health service.

The National Network of Abortion Funds believes tax dollars should cover the full spectrum of healthcare, and until our government recognizes this, we’ll show them how it should be done.