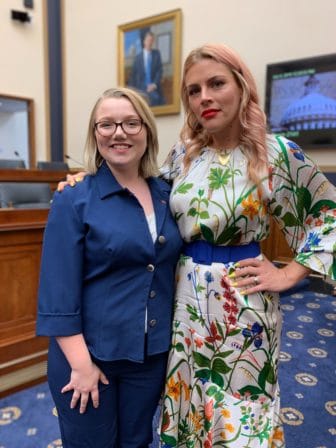 The House Committee on the Judiciary held a hearing on Threats to Reproductive Rights in America on Tuesday, June 4, 2019. The committee heard from expert witnesses on the state of abortion access and how the various barriers disproportionately impact marginalized communities. Youth Testify leader HK Gray testified about the barriers she faced when seeking an abortion in Texas as a minor, including needing a judicial bypass to obtain an abortion.

At 15, Gray became pregnant and gave birth shortly after her 16th birthday. When she became pregnant again at 17, she sought an abortion but was hindered by Texas’ parental consent law. With her parents unable to consent due to homelessness and incarceration, Gray sought a judicial bypass where she had to prove that she, already a parent, was mature enough to not have a second child that she could not afford.

In her hearing testimony, Gray outlines the irony of these anti-abortion laws and how they create more financial and logistical barriers to abortion access for those who need it most. Full testimony below.

“When I tried to get an abortion, I didn’t realize how hard it would be. Texas requires parental consent for anyone under 18 years old. It’s not that my parents would have opposed to my decision, it’s that they weren’t physically able to give their consent. This was a new concept to me because it’s something I didn’t have to do when I had my daughter. It seemed weird to me that I didn’t need anyone’s permission to become a parent, but I needed to prove to the state that, as a parent, I was mature enough to not have another child…Government restrictions on abortion hurt those of us who have fewer resources, or are people of color or undocumented or living with disabilities or poor or queer. In Texas, the state prohibits all types of health insurance from covering abortion care and we have to pay out of pocket. I couldn’t afford my abortion, but thankfully a family member lent me the money.” 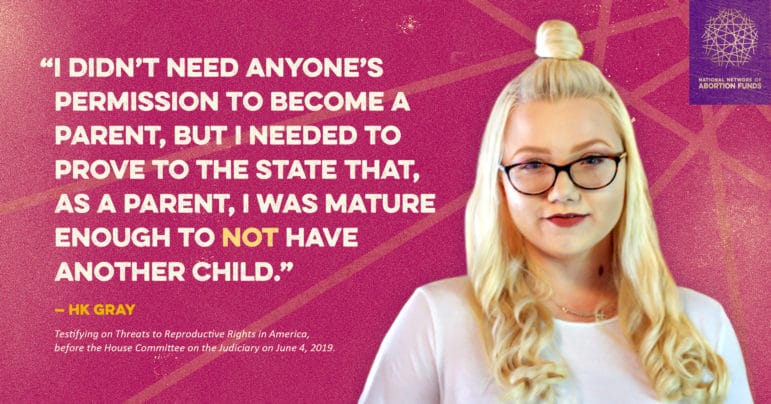 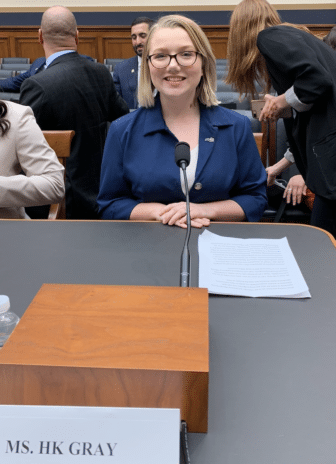 “Good morning and thank you to the Chairman and Ranking Member for this opportunity to share my story and bring to light the very real ways restrictions to abortion access threaten our ability to make autonomous reproductive health decisions and raise the families we want.

My name is HK Gray. I am 18 years old and I came here today all the way from Fort Worth, Texas. I am an activist with Youth Testify, a leadership program through Advocates for Youth and the National Network of Abortion Funds. It is an honor to be able to speak before you today.

I became pregnant for the first time when I was 15 and had my daughter shortly after I turned 16. Immediately upon finding out I was pregnant, I knew I would continue the pregnancy. Despite a bit of preterm labor, my baby arrived right on time. She’s in her terrible twos now and I love her. I am fortunate to have the incredible support of my fiance but becoming a parent has also had challenges, like losing my friends and not being able to attend school. I’ve been on my own for a few years now because my father is homeless and my mother was incarcerated. They weren’t in a situation to support me legally, financially, or emotionally. I know they love me, but they’re unable to parent me the way I need them to, and the state requires.

After having my daughter, I tried to get a Paragard IUD, but I was unable to because in Texas, in order to get birth control, I need my parent’s consent — something I couldn’t get due to my parents’ situations. Although my doctor was sympathetic, she couldn’t legally give it to me.

A few months later, I became pregnant again, but I miscarried. Ten months after giving birth to my daughter, I realized I was pregnant for a third time. When I told my fiancé, we knew what the other was feeling. We couldn’t afford a second child and it was hard when I had to go back to work a week after having my daughter because I didn’t have paid parental leave. Adoption wasn’t the right decision for us because if I continued the pregnancy I would have wanted to parent, and the WIC, SNAP, and Medicaid programs aren’t enough as it is.

When I tried to get an abortion, I didn’t realize how hard it would be. Texas requires parental consent for anyone under 18 years old. It’s not that my parents would have opposed to my decision, it’s that they weren’t physically able to give the consent. This was a new concept to me because it’s something I didn’t have to do when I had my daughter. It seemed weird to me that I didn’t need anyone’s permission to become a parent, but I needed to prove to the state that, as a parent, I was mature enough to not have another child.

Thankfully, I found Jane’s Due Process, an organization that helped me find a clinic and connected me to a lawyer who walked me through the judicial bypass process. I had to get an ultrasound to take to court and prove how far along I was.

A few weeks later, when I finally went to court, it was a long day and honestly it was very hard on me. The judge said some hurtful things about me being sexually active, being a young parent, and wanting an abortion. I felt shamed no matter which decision I made. The judicial bypass process is a burden and barrier to abortion access.

My actual abortion was pretty straightforward. The providers were kind and treated me like an adult. I was glad to get back home to care for my daughter. The irony of this whole experience is that I could make medical decisions for my daughter, but not for myself. When I take my daughter to see a doctor, I’m treated like an adult, but I couldn’t get routine care at the dentist or get birth control without my parents’ permission.

I believe we need more support in this country for young women and transgender people who want to be able to access birth control or want to parent or want an abortion, or like me, needed all of those things at different points in my teenage years.

Government restrictions on abortion hurt those of us who have fewer resources, or are people of color or undocumented or living with disabilities or poor or queer. In Texas, the state prohibits all types of health insurance from covering abortion care and we have to pay out of pocket. I couldn’t afford my abortion, but thankfully a family member lent me the money. Like me, most people seeking abortions are already parenting and are balancing paying for child care, food, and rent. In Texas 96% of counties do not have abortion clinics, impacting nearly half of Texas women. We have to figure out how to take time off work or school to travel to get an abortion, find someplace to stay, and pay for it all. We are forced to listen to government-mandated medically-inaccurate counseling, and wait 24 hours and go to the doctor twice before getting an abortion. Unlike me, the majority of people who have abortions are people of color, and we must respect their decisions. I wish there was more support for people of color who are impacted by these restrictions harder than I am.

We need more love and compassion for families and young people like me. I had a child, I had a miscarriage, and I had an abortion. As we say at the National Network of Abortion Funds, “everyone loves someone who had an abortion.” Thank you for your time and I hope my story helps you remember these laws that you pass impact your constituents, like me, and your loved ones who have abortions.”

Youth Testify is a collaborative leadership program for young people who’ve had abortions created by Advocates for Youth’s 1 in 3 Campaign and the National Network of Abortion Funds’ We Testify program. Youth Testify provides training and support to equip young people, aged 17-25, with the skills to share their stories with their peers, the media, and legislators, to shift the culture of stigma and center the voices and needs of young people in the fight for abortion access and reproductive justice.

The National Network of Abortion Funds builds power with members to remove financial and logistical barriers to abortion access by centering people who have abortions and organizing at the intersections of racial, economic, and reproductive justice.

We Testify, a leadership program of the National Network of the Abortion Funds, is dedicated to increasing the spectrum of abortion storytellers in the public sphere and shifting the way the media understands the context and complexity of accessing abortion care. We Testify seeks to build the power and leadership of abortion storytellers, particularly those of color, those from rural and conservative communities, those who are queer identified, those with varying abilities and citizenship statuses, and those who needed support when navigating barriers while accessing abortion care.

Advocates for Youth partners with youth leaders, adult allies, and youth-serving organizations to advocate for policies and champion programs that recognize young people’s rights to honest sexual health information; accessible, confidential, and affordable sexual health services; and the resources and opportunities necessary to create sexual health equity for all youth.

The 1 in 3 Campaign is a grassroots movement to start a new conversation about abortion—telling our stories, on our own terms. Together, we can end the stigma and shame women are made to feel about abortion. As we share our stories we begin to build a culture of compassion, empathy, and support for access to basic health care. It’s time for us to come out in support of each other and in support of access to legal and safe abortion care in our communities.